[dropcap]T[/dropcap]he Golden State Warriors are currently 37-4 with the best record in the NBA. With a record this amazing it is clear and obvious that the reigning NBA champ are not only eyeing a comeback, but improvement. So far, the Warriors could be on pace to win more than 72 games this season. Making this run a more impressive run than the 1995-1996 Michael Jordan-led Chicago Bulls. More impressively, the Warriors managed to win 24 straight games before suffering their first loss against the Milwaukee Bucks on December 12th.

One can say their motivation started right after they won an NBA title just last year by beating the Cleveland Cavaliers in six games. Warriors center Andrew Bogut wrote in his column for NBA Australia earlier in the season “It’s probably better for us to come into a season after winning a championship and then being doubted once again” (Hughes, “Golden State Warriors Proving More Doubters Wrong on Current Historic Run”). Defeating the Pelicans in the first round, then the Grizzlies in the second round, the Rockets after in the conference finals and the Cavs in the NBA finals gives the team plenty of hope and confidence heading into the middle of this season.[pullquote]The Warriors have unquestionably proved that they are favorites to win back-to-back titles, and Warriors’ superstar, Stephen Curry has looked even better than he was last season[/pullquote]

The Warriors have unquestionably proved that they are favorites to win back-to-back titles, and Warriors’ superstar, Stephen Curry has looked even better than he was last season. 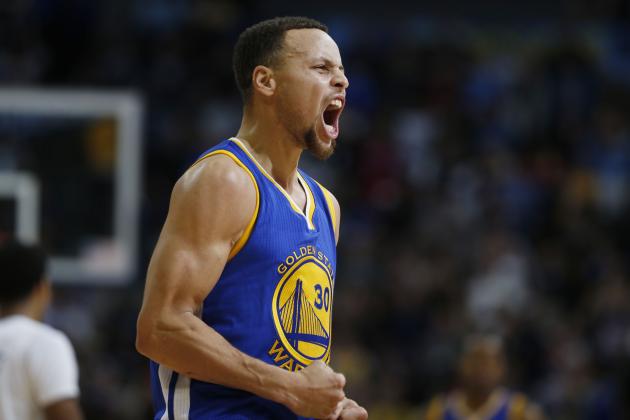 In the 2014-2015 NBA season Stephen Curry averaged about 24 points per game (23.8) on .487 field goal percentage and .443 in 3-point field goal percentage which puts him among the best in the NBA last season. This season however, Curry has improved in almost every statistical category by averaging nearly 30 points per game (29.9) on .447 3-point percentage. Curry is on a massive tear this season looking to improve both himself and the team in every category this NBA season.

Though the NBA is about to reach the halfway point in the season and the Warriors have now lost a total of four games to date, The Warriors still remain the best team in the NBA with the best record. Teammates Klay Thompson, Draymond Green, Andrew Bogut and sixth man Andre Iguodala have all stepped up this season and like Stephen Curry have also improved their stats as well. In the 1995-1996 Season, the Michael Jordan led Bulls have never amassed a winning streak like that Warriors this season which could give way of the bulls passing the torch to the Warriors for having the best record in NBA history. The past is the past, but the future is now and the Golden State Warriors are looking forward to making NBA history.

How Not to Run into Voldemort in April