Idris Elba: “As an Actor I’m Always Reading Someone Else’s Thoughts. What about My Own Thoughts?”

[dropcap]A[/dropcap]nyone for oysters?” Idris Elba booms over the table. “I had caviar the other day for the first time, on a baked potato. I would have just done with baked beans, buuuuut – caviar, mate, no problem. It tasted like tiny mushrooms to me.”

Oysters and caviar were not meant to be on the menu tonight. I was supposed to meet the Hackney-born actor in east London, to revisit his old stomping ground and reminisce about going from the Holly Street Estate to Hollywood. But instead here we are in a Mayfair restaurant that Jay Rayner once described as being “where the prices are as bruising as a rugby scrum on crystal meth”.

A platter of oysters arrives on a silver stand and I soon realise that, even as a vegetarian, I have to eat one. Idris and his team are celebrating his new single being named Hottest Record In The World on Radio 1 and I can’t say no. You don’t say no to Stringer Bell. Or John Luther. Or the guy that everyone keeps hounding about whether or not he’s going to be the next James Bond.

“Here’s a pretty one. I’m going to do it for you. Do you like spicy food?” he says, scooping up a crusty shell. He tips the sea water back into the bowl and taps Tabasco on the offending item.

If I don’t agree to this, what’s going to happen? 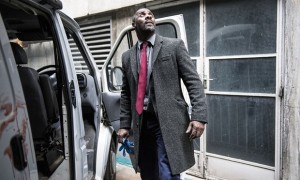 I chuck it back with a grimace and he lets out a hearty laugh. “That was great,” he says. “Some people throw up at that point.”

Elba is the kind of guy who can make the unexpected happen. For years, his career consisted of small roles in episodes of The Bill and Crimewatch. He moved to New York, only to spend three months living out of a car as he looked for work. But since 2002, when he landed his breakthrough role as bespectacled Baltimore gangster Stringer Bell in The Wire, he’s never struggled again.

He is big league now, winning Golden Globes for Luther and working with directors such as Guillermo Del Toro and Ridley Scott. He can tick off roles as armoured fantasy dudes (Thor, Pacific Rim) and sci-fi captains (Prometheus, a role in the new Star Trek). He’s played statesmen (Mandela: Long Walk To Freedom) and warlords (Beasts Of No Nation). He often plays the tough guy but he does it with a rugged, affable charm and really, really firm biceps.

Elba is also a bit of an everythingist. He writes, he directs, he DJs, he raps; not so long ago he broke a landspeed driving record. These side projects don’t always match up to his steely cool image – like those oddly chipper Sky adverts. But for every eyebrow-raiser there’s a moment, as in the new Luther, where he knocks a guy off a motorbike with a bin. 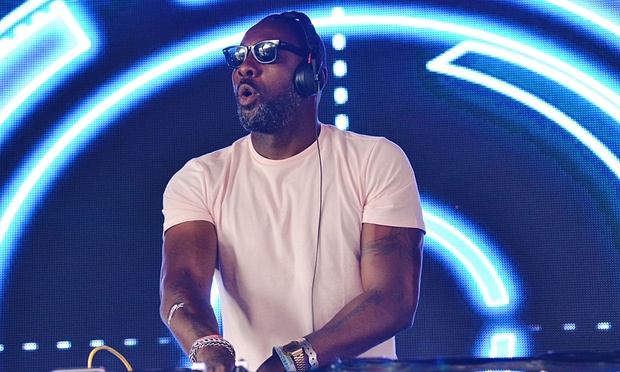 oday he’s here to talk about a record: Murdah Loves John, a “character album”, inspired by and released to coincide with the return of his overcoat-clad police officer later this month. Perhaps not unexpectedly for something that claims to offer “a murder detective’s point of view on murder”, it’s notably dark. Trip-hop influences and steely soul reflect Luther’s twisted psyche, but, maybe not coincidentally, the lead track’s cinematic strings also recall the theme to a certain spy franchise.

Rather than perform on the album himself, Elba is more its Rick Rubin, overseeing the music with producer Fred Cox. A relative unknown, Cox also had the pressure of pulling the project together in just three weeks when Luther’s air date was brought forward at the last minute. “I wanted [the album] to be about the texture of the TV show. There’s not much room for Idris singing or rapping, that would be silly,” says Elba, who plans on making more character albums. “I want to create a genre, to be the conduit that brings together character albums for life, free of that stigma. No one wants to hear an actor sing if he can’t sing.”

In the past, Elba hasn’t always taken his own advice. He’s attempted a solo music career a few times, though never quite successfully. For every weighty spoken-word intro on a Jay-Z album (2007’s American Gangster), there’s one of Elba’s own songs like Sex In Your Dreams, whose most memorable lines is “dick thick like homemade butter”. [pullquote]“To me,” he says, “grime is the purest form of hip-hop in the world at the moment because it comes from a place of: ‘We are who we are and we aspire to be this.’[/pullquote]

“You must be thinking: ‘Fucking hell, why are you doing that?’” he hollers, slapping his thigh at the memory. “I was on a film called Ghost Rider: Spirit Of Vengeance and I had a lot of downtime. Imagine me in a Hilton hotel: desk, laptop, little mic, me sitting there in me boxers…”

He leans back, arm around the booth, a pure East End cheeky chappie. But that tone changes as he lasers in on his motivations. “As an actor, all day long I’m reading someone else’s thoughts. What about my own thoughts? That comes out in various guises. Writing. Directing. And music, unfortunately.”

Elba is self-aware enough to know that some think his musical endeavours aren’t credible. But he takes them as seriously as he does his oysters. His interest in music began even before his love of theatre, DJing calypso when he was 14 with his uncle at weddings. soon started their own rare groove, Social Affair. “I ain’t gonna lie to ya, we were mid-table,” he chuckles. Next stop was a Saturday drivetime show on pirate radio station Climax FM under the name Mr Kipling

His appetite for dabbling may have been apparent even then, but his love of soundsystem culture is real. And it’s one of the reasons that leads Elba to have an affinity with UK grime: earlier this year he guest-rapped on a remix of Skepta’s party hit Shutdown, and at one point in the evening, talking about current music, he exclaims: “I’m a 43-year-old man and I love Stormzy!”

“To me,” he says, “grime is the purest form of hip-hop in the world at the moment because it comes from a place of: ‘We are who we are and we aspire to be this.’ I feel close to that. That’s where US hip-hop lost some of its way because now it’s like: ‘We’re all ballers and we all make stupid amounts of money.’”

After we finish dinner, Elba asks if we can still go to Hackney, but a team of tired PRs, assistants and music managers are in close attendance to remind him that he has a 4am alarm. Instead we go to a bland Soho members club. I don’t get to ride with him for the short journey but his face looms out of the windows of a Regent Street store as my taxi goes past.

In the bar, he orders a Sex on The Beach and starts to seem agitated, or possibly just knackered. I wonder where he feels most comfortable – in front of the camera or the decks? “I don’t know, man. I can’t really… Has anyone got a cigarette?”

And suddenly I am in a stairwell with Idris Elba, smoking a cigarette. He seems far taller than before. He finishes my question. “I don’t try to get too comfortable in any of it. If I did, I’d probably stay still.”

It’s sometimes easy to forget that Elba is a Hollywood player who flies by private jet. One minute he’s sincere, the next he’s goofing around, a flurry of accents and impressions – pirate radio DJ, east coast wise guy. Often he talks about himself in the third person, or delivers tangential spiels that sound like they’ve been lifted from a motivational manual. But it’s his first-hand experience of struggle that orients him and gives him more of a grounding than most famous people.

“A lot of people that come from nowhere, to me that’s really important,” he says of what fires him creatively. “I’m not about the celebrity aspect of [art]. For me what’s interesting is: what is that moment where somebody like me, who doesn’t have [anything], can see Michael Jackson, Denzel Washington, Wesley Snipes and go: ‘I wanna be like that’? And what is that moment where you know you can get there?”

He has to be up in three hours, and we haven’t even touched on the new Luther yet. What’s next for telly’s most tortured bobby? “Luther definitely has had a lot of bad shit happen to him,” says Elba, “and he’s tired.” I suspect he’s having me on because the teaser trailers show him bundling an old man into the boot of a car. “Well, it starts him off as chill, so we notice that he can relax. And then, yeah, shit starts to happen.” Will it be the last one? “Nah, nah,” he says. “I would like to make it into a movie.”

Ah, like another dapper Brit with a licence to kill? Even at 1am, Sex On The Beach all but slurped, still hanging in the stairwell, the B-word lingers in the air, along with the waft of something herbal from the Tory boys who have also congregated outside. Elba hates being asked about it, and, frankly, I am scared to ask him. But he continues, unprompted, without me having to. “Murdah Loves John sounds comparable to a Bond tune, right? Bond’s great, but Luther? A new Luther tune every time? He might not be suave with, y’know, ‘Rah rah, rah, I’ll have a fancy car.’ He’ll drive a Volvo and still get there.”

You’re really saying you don’t need to be the next Bond because you already have your own Bond? He avoids the question and launches into one of his Idris-y explanations. “I’m just saying that Murdah Loves John has the same sort of gravitas as any Bond song. That’s reinvention. Come on, man, this is art, man; we’ve all had a paintbrush, we all can’t paint the same landscape.” Forget being the next Bond, then, if someone came knocking and asked him to do the next Bond theme, would he do it?

“Absolutely. I’m all for that.”

McGee Speaks with our Reporters